RIDGEFIELD, Wash. and TEMPE, Ariz., June 29, 2020 /PRNewswire/ — U-Haul® was born as World War II was coming to a close, with its first one-way trailers made available to the moving public on or about July 4, 1945. 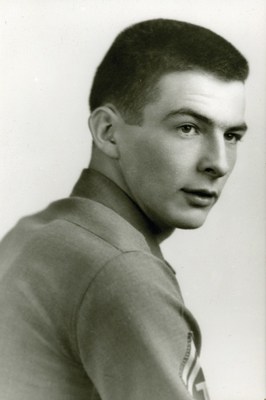 Just as U-Haul is celebrating 75 years of service this year, America will soon celebrate the 75th anniversary of V-J Day. This signifies Victory over Japan and is observed Sept. 2 when the signing of surrender occurred, effectively ending WWII.

Veterans such as Ridgefield native and longtime Tempe resident Hap Carty pursued a new life after the war, and in doing so planted the seeds of prosperity for U-Haul, a product of the peace for which America fought.

WWII-era Navy veteran L.S. «Sam» Shoen and his wife, Anna Mary Carty Shoen, conceived U-Haul in June 1945 when they recognized a basic need while moving up the West Coast, having left behind most of their belongings since one-way trailer rentals did not yet exist. From that idea, an industry was created and a new level of mobility became attainable for every American family.

The Company’s 75th anniversary tributes will peak triumphantly with the Pearl Harbor Aviation Museum’s dedication of the renovated Ford Island Control Tower on Aug. 29. A number of U-Haul Pacific Theater veterans’ bios and photos will be displayed in the tower lobby.

The tower will showcase a new elevator, gifted by U-Haul CEO Joe Shoen, providing public access to the observation deck where America’s lone WWII aviation battlefield can be revered and our heroes remembered.

Carty was born in 1927 to Bill and Mary Carty. He grew up on the family ranch in Ridgefield. He was the third of six children, and brother to U-Haul co-founder Anna Mary. Carty not only worked the ranch, but he worked in shipyards and lumber mills during his high school years. He attended Ridgefield High School, graduating in 1945.

Carty joined the Army immediately after high school. He went through 17 weeks of infantry training at Camp Roberts, Calif. He then put in for an overseas tour, but was assigned to the 1st Infantry Division’s transportation unit at Fort Riley, Kan. Though he did not face the perils of combat since the war was coming to an end, Carty remained willing and ready to serve his country. He was honorably discharged as a private first class (PFC) in 1946.

Carty came home on furlough at one point in 1945 and found himself in the business of building trailers. His brother-in-law had converted an old milk house on the Carty ranch into a welding and carpentry shop, and was in the process of building the first fleet of U-Haul trailers. During his furlough, Carty helped build the first 10 U-Haul-manufactured trailers.

After his discharge in 1946, Carty joined the upstart business to become the first U-Haul employee. In 1952, Carty established the first U-Haul manufacturing plant east of the Mississippi River. It was stationed in Boston. In the late 1950s, Carty enrolled in night classes and completed two years of manufacturing management undergraduate study at Penn State University.

As president of Kar-Go, Carty was instrumental in establishing the U-Haul Technical Center in Tempe, Ariz., in 1970. At that time, it was the industry’s only such research and development facility of its kind.

Carty retired in December 1987, but continued to serve on the AMERCO and U-Haul boards through 2006. He also served on the Tempe Zoning Board of Adjustment and was a longtime member of the Tempe Chamber of Commerce.

Carty and his wife, Toni, have six children: Gail, Tim, Martin, Kevin, Katie and Patrick. They have 14 grandchildren and 15 great grandchildren. Carty continues to be a resident of Tempe.

The Shoens started U-Haul upon Sam’s discharge with $4,000 of accumulated Navy pay and the courage formed by the cauldron of WWII. With the help of other veterans, the young couple forged their new enterprise from the freedom that victory produced.

Today, U-Haul serves all 50 states and 10 Canadian provinces, helping millions of families move every year. Carty is one of the many veterans who laid the foundation for the present prosperity U-Haul enjoys.

U-Haul is one of a myriad of companies built by these incredible veterans, who are to be saluted and remembered during this 75th anniversary celebration. Thank you, Hap.

Find more veteran tributes in the History and Culture section of myuhaulstory.com.

Since 1945, U-Haul has been the No. 1 choice of do-it-yourself movers, with a network of 22,000 locations across all 50 states and 10 Canadian provinces. U-Haul Truck Share 24/7 offers secure access to U-Haul trucks every hour of every day through the customer dispatch option on their smartphones and our proprietary Live Verify technology. Our customers’ patronage has enabled the U-Haul fleet to grow to approximately 167,000 trucks, 120,000 trailers and 43,000 towing devices. U-Haul offers nearly 697,000 rooms and 60.7 million square feet of self-storage space at owned and managed facilities throughout North America. U-Haul is the largest installer of permanent trailer hitches in the automotive aftermarket industry, and is the largest retailer of propane in the U.S. For information on moving safely and smartly with U-Haul during the COVID-19 pandemic, please reference https://www.multivu.com/players/English/8601451-u-haul-moving-season-covid-19-safety/.