COLUMBUS, Ohio,  Aug. 24, 2018 /PRNewswire/ — White Castle, America’s first fast-food hamburger restaurant, today announced plans to open its first restaurant at «The Block» located on Route 101 in Scottsdale, Arizona. The new Castle, which is targeted to open in 2019, will mark the family-owned company’s first restaurant in the state of Arizona and is expected to bring 50 to 75 new jobs to the area. It will also be the first White Castle family owned location west of the Mississippi River. 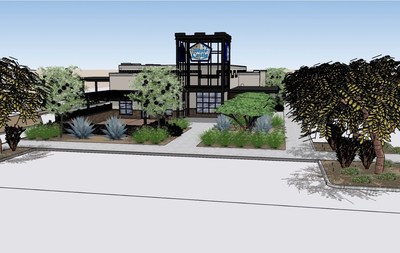 «For years, Cravers in Arizona have been asking us to feed their souls by bringing our delicious sliders to the state, and we’re happy to announce that we’re going to make this dream a reality,» said Jamie Richardson, vice president at White Castle. «We are eager to become a member of the Scottsdale community, and to share our Crave-able menu items and quality service with Arizonians all day, every day.»

The new restaurant to be located at The Block at Pima Center, on the northwest corner of Via De Ventura and Loop 101 in Scottsdale, AZ, will feature all the Craveable menu items customers love at White Castle. The restaurant chain is working closely with Mainspring Capital in conjunction with Palmer Development Group to design and construct the new restaurant, which will be located near Scottsdale’s 101 Entertainment Corridor. The development is renowned for such sites and experiences as OdySea in the Desert, Talking Stick Resort, Top Golf, IFly, Medieval Times, Great Wolf Lodge and Salt River Fields.

«We are thrilled to add this iconic brand to our lineup at The Block,» said Daniel Lupien, managing partner of Palmer Development Group. «The fact that White Castle chose our site for their first corporate expansion west of St. Louis is a real testament to the dynamics of the area and specifically The Block at Pima Center. They certainly had many options to choose from.»

Like many areas around the country, the Crave for White Castle in Arizona has been real for quite some time. In 1982, White Castle famously sent two semi-trucks full of thousands of sliders to imploring Cravers in nearby Fountain Hills, AZ. The event became known as the «Midwest Fest» and proceeds from the more than 100,000 sliders were donated to an Arizona handicapped facility.

Founded in 1921, White Castle is home to The Original Slider®, recognized by Time Magazine as the most influential burger of all time. Today, White Castle’s famous fare is served 24 hours a day, seven days a week in most restaurants, including breakfast.

White Castle, America’s first fast-food hamburger chain based in Columbus, Ohio, has been making Bold Moves™ as a family-owned business for 97 years. The company was founded in Wichita, Kansas, in 1921, serving The Original Slider®, made from 100 percent USDA inspected beef. Today White Castle owns and operates nearly 400 restaurants in 13 states. The pioneering original slider, Time Magazine’s most influential burger of all time, is served alongside a menu of creatively crafted sliders and other tasty food options. White Castle’s commitment to maintaining the highest quality products extends to the company owning and operating its own meat processing plants and bakeries as well as three frozen food processing plants. The retail division markets White Castle’s famous fare in grocery, club stores, convenience stores, vending operations and concessions across the United States and in a growing number of international locations, including military base exchanges around the world.

Cravers on-the-go can access sweet deals and place a pick-up order any time in the official White Castle app. Download the app today from the iTunes App Store or Google Play. For more information on White Castle visit whitecastle.com.