Newton Group Provides Access To Justice For Consumer Who Was Manipulated By Diamond Resorts Into Buying $56,000 In Timeshare Points 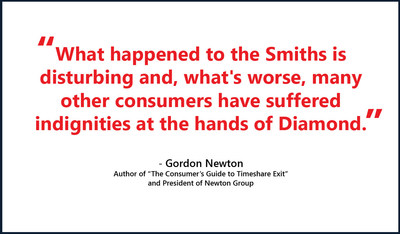 The couple, in fear of reprisal, asked to be referred to by the names Anne and Mike Smith. Anne, a 75-year-old retired painter, said she is haunted by the memory of that day. «A day does not go by that Diamond doesn’t enter my mind,» she said. «I believe that they misled us.»

The Smiths are just one elderly couple out of potentially hundreds of consumers whom Diamond Resorts has preyed upon, while disingenuously claiming in a lawsuit that consumers like the Smiths should not have the benefit of seeking third party assistance from Newton Group or affordable lawyers hired by it to represent the Smiths. That lawsuit is pending in federal court, and the Smiths account of abuse will be presented as evidence against Diamond Resorts in that lawsuit.

The Smiths recount how, in October 2018, they met with Diamond for the sole purpose of ending their timeshare ownership, but instead were duped into buying more timeshare points. According to the Smiths, the Diamond sales representative led them to believe the purchase of  $56,000 in points—including a down payment of $17,130—would be the necessary step to end their ownership of two previously purchased timeshare weeks.

«Shortly before our vacation we had received a letter [from Diamond] saying do not hire a third party to dismiss your timeshare, let us help you,» said Anne. «And I told my husband, when we go, we are going to talk to them about this.»

Instead of being given the right to terminate, the Smiths now have three separate timeshare contracts and the maintenance fees have increased as a result. «It’s the last one that really did us in,» said Mike, an 81-year old retired teacher.

Mike said not being able to reserve travel for their requested times and locations made them disenchanted, and led them back to Diamond, letter in hand, to seek an end to their timeshare ownership. But instead of helping to exit their timeshare, Diamond used the opportunity to sell the Smiths their third timeshare. It was at this point they decided they needed third party assistance and hired Newton Group, a long-standing, reputable timeshare exit company.

«My husband checked into the Better Business Bureau on Newton [Group] and we talked about it and we knew we had to do something so that we can go on with our life,» Anne said.

Gordon Newton, author of «The Consumer’s Guide to Timeshare Exit» and President of Newton Group said what happened to the Smiths is disturbing and, what’s worse, many other consumers have suffered indignities at the hands of Diamond. His company has many signed and notarized declarations by Diamond timeshare owners with similar negative experiences.

«This is a couple who did exactly what Diamond is asking their owners to do—come back to them to seek help in ending their ownership,» Newton said. «But you can’t expect fair treatment when there is a clear conflict of interest. Diamond sales representatives don’t earn commission from ending timeshares, they earn commission for selling timeshares.»

Newton Group has retained an attorney to work on behalf of the Smiths. «We feel better about it knowing that [our attorney] is going to stick with us, follow through, and stand behind us,» Anne said.

She said there is a need for third party timeshare exit companies, and hopes their story helps others.

Gordon Newton is a 15 year veteran of the timeshare exit industry and author of «The Consumer’s Guide to Timeshare Exit».  Newton Group is A+ rated with the Better Business Bureau (BBB), finalist for the Torch Award for Ethics and five star rated at Google, Trustpilot and the BBB.