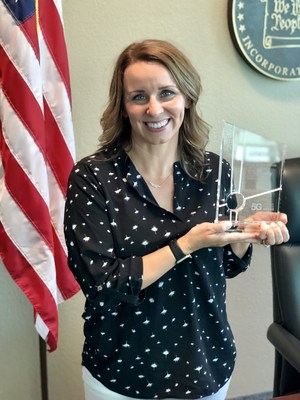 The reforms accelerate the ability of wireless providers to install small cells by standardizing fees, clarifying the use of public rights-of-way for deployments, and setting timelines for the review of applications. As a result, wireless providers can more quickly add capacity to wireless networks to meet growing demand for mobile broadband, while laying the groundwork for 5G networks.

«Mayor Daniels has built a successful record bringing investment and opportunity to Gilbert,» said Meredith Attwell Baker, President and CEO of CTIA. «As one of the first communities in America to streamline rules for small cells, Gilbert will benefit from increased economic and job growth, as well as the innovations that 5G will deliver.»

Small cells are about the size of a backpack and are installed on utility poles, streetlights, and the sides of buildings. Small cells can be installed in about an hour, but in areas with rules designed for 200-foot cell towers, can take more than a year to get approval. The wireless industry will need to deploy hundreds of thousands of modern wireless antennas – small cells – in the next few years to keep up with increasing consumer demand for wireless data and to build out new 5G networks.

About 5G
Next-generation 5G networks will be one hundred times faster than today’s 4G networks, connect one hundred times more devices and be five times more responsive. They will bring a range of economic and social benefits and enable a variety of smart city innovations, the Internet of Things, driverless cars and more.

About the 5G Wireless Champion Award
The 5G Wireless Champion Awards honor the state and local officials that best exemplify the leadership and vision needed to bring next-generation 5G networks and innovation to their communities. They are given to officials who champion reforms, policies and practices that remove barriers to the deployment of next-generation wireless infrastructure.

About CTIA
CTIA® (www.ctia.org) represents the U.S. wireless communications industry and the companies throughout the mobile ecosystem that enable Americans to lead a 21st century connected life. The association’s members include wireless carriers, device manufacturers, suppliers as well as apps and content companies. CTIA vigorously advocates at all levels of government for policies that foster continued wireless innovation and investment. The association also coordinates the industry’s voluntary best practices, hosts educational events that promote the wireless industry and co-produces the industry’s leading wireless tradeshow. CTIA was founded in 1984 and is based in Washington, D.C.